Recently we celebrated my mother’s 90th birthday. She turned 90 on January 16th but didn’t want to inconvenience people with driving in the snow, so we put off the party until April. We had about 60 people for a Chinese banquet at the New Dynasty Restaurant in Lethbridge. We had 6 large round tables and there was lots of conversation throughout the afternoon. The meal was excellent. (My mother had minor complaints a few days later, but that’s the usual scenario.) Everyone else agreed with me. I had ordered a cake from Cakeworks in Calgary. My brother and sister-in-law (Phil & Janet) and their oldest (very pregnant) daughter and her husband (Meg and Derek) flew in from the coast, so I had them pick up the cake. Unfortunately Janet had to ride the 2 1/2 hour trip from Calgary with the cake on her lap. Thank you, Janet. Here are some photos from the party, showing my mom & dad’s table, my mom with her siblings (she’s wearing her coat on her shoulders), the table with mostly my family, the cake and a photo of me with my mom and my oldest daughter, Devon. 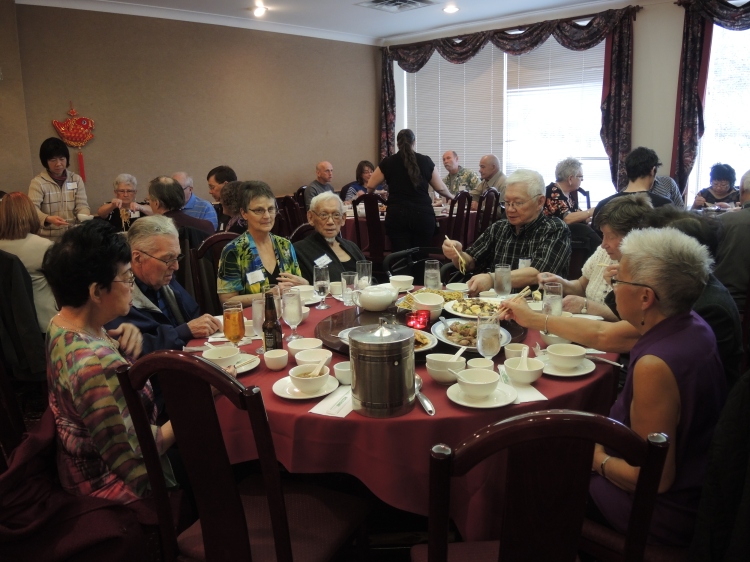 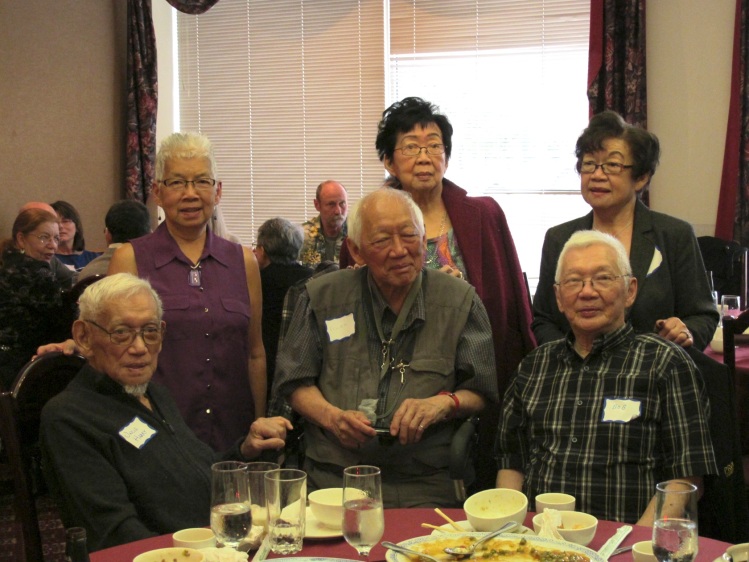 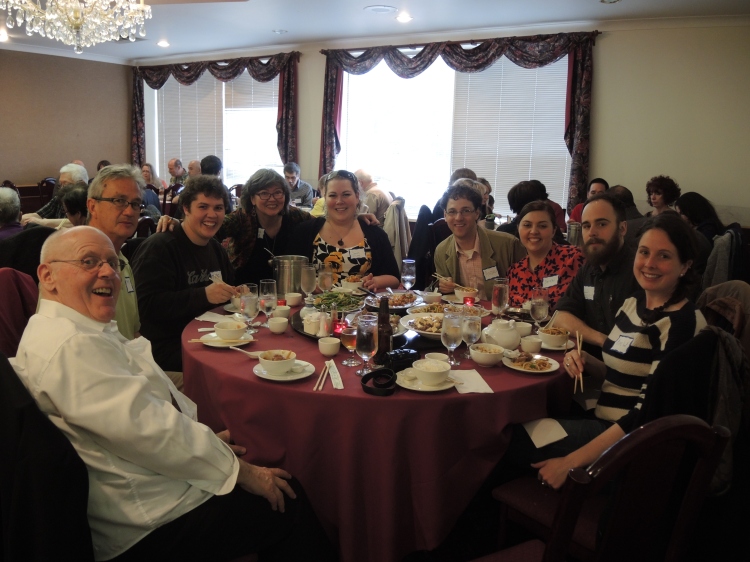 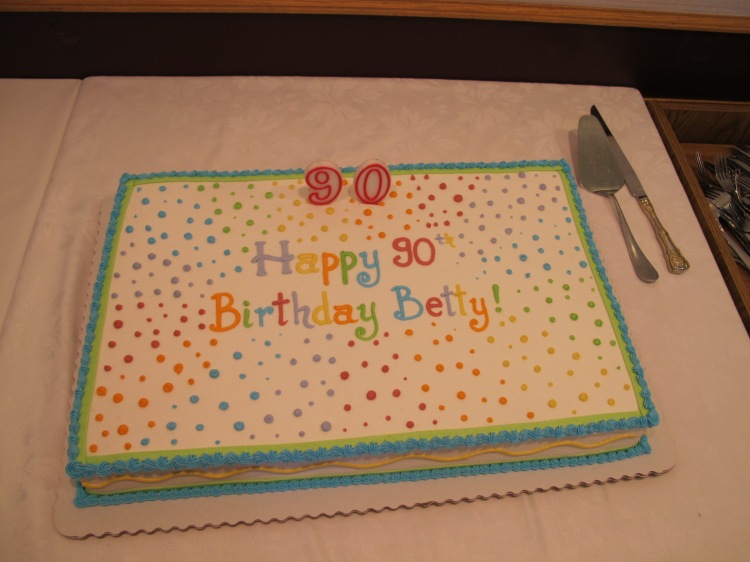 Here we are at my parents’ house. Quite a few family members came to the house after the restaurant party. It was relaxed, casual and crowded – like so many family gatherings from the past. All the grandchildren (plus partners and friends) spent a few hours searching through old photos and memorabilia. They were successful in establishing some dates and sorting out a fantastic mess. Several photos were scanned and we are planning to do the rest so the images don’t get lost. 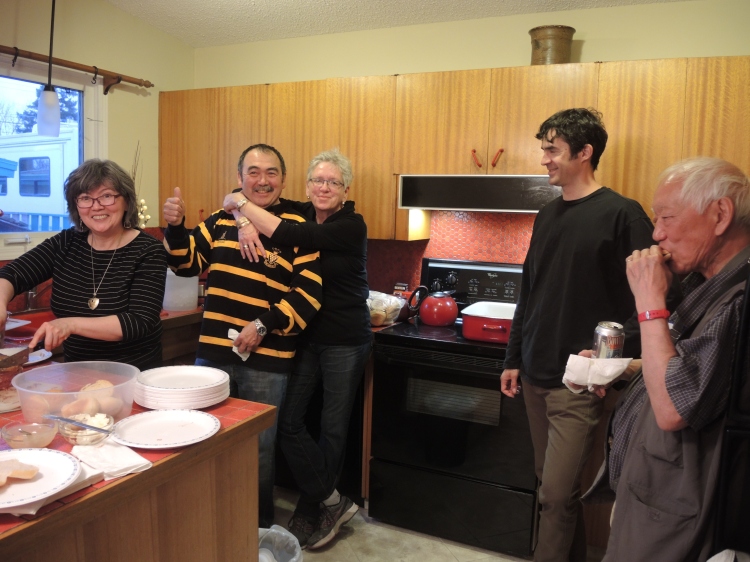 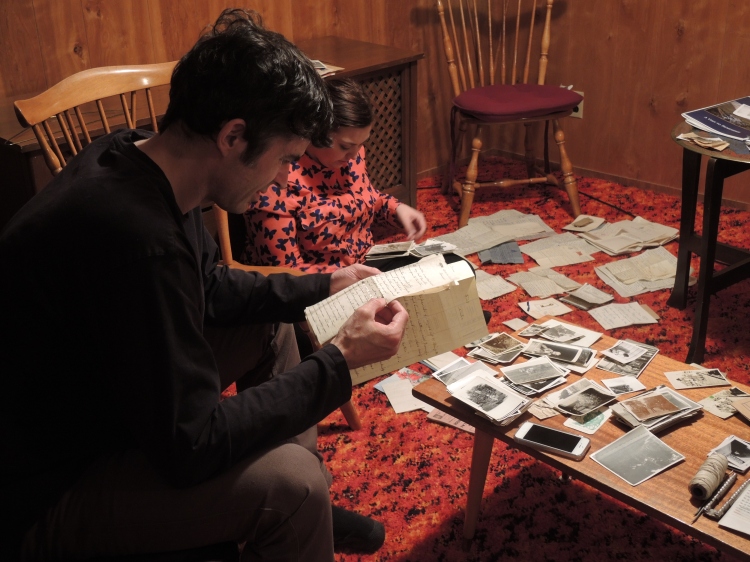 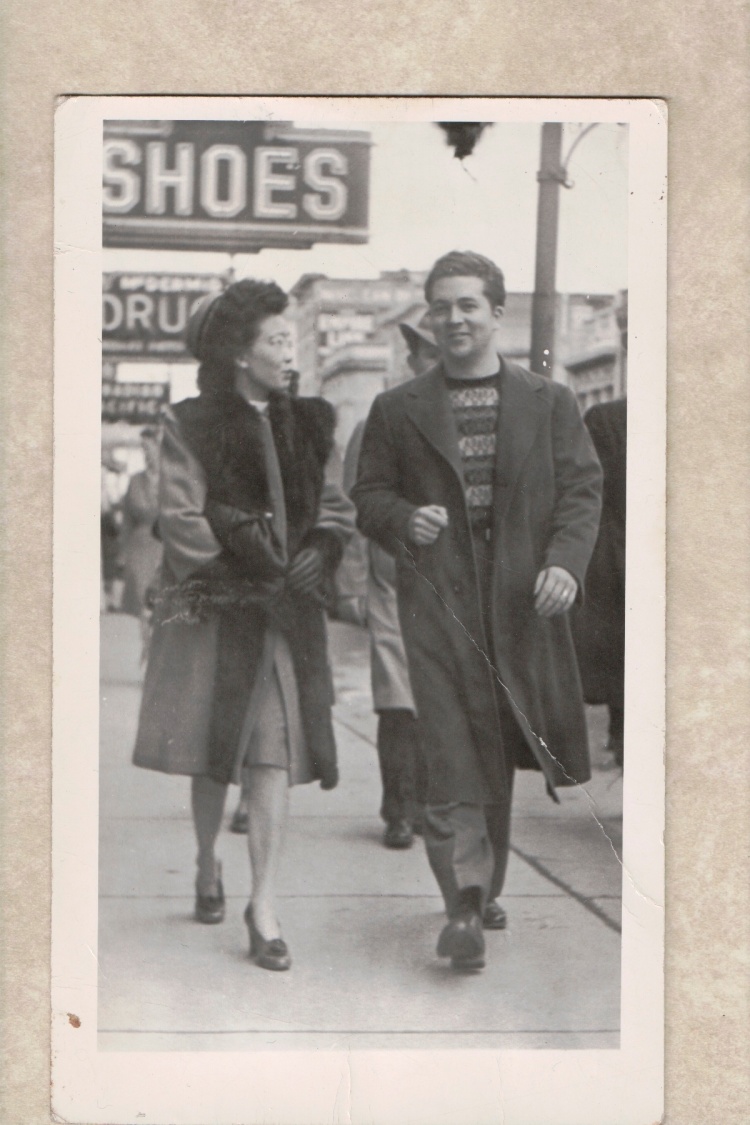 My parents’ basement is a virtual treasure trove of old things – including these vintage Hudson Bay coats. These coats are now scattered across the county, keeping the grandchildren warm. 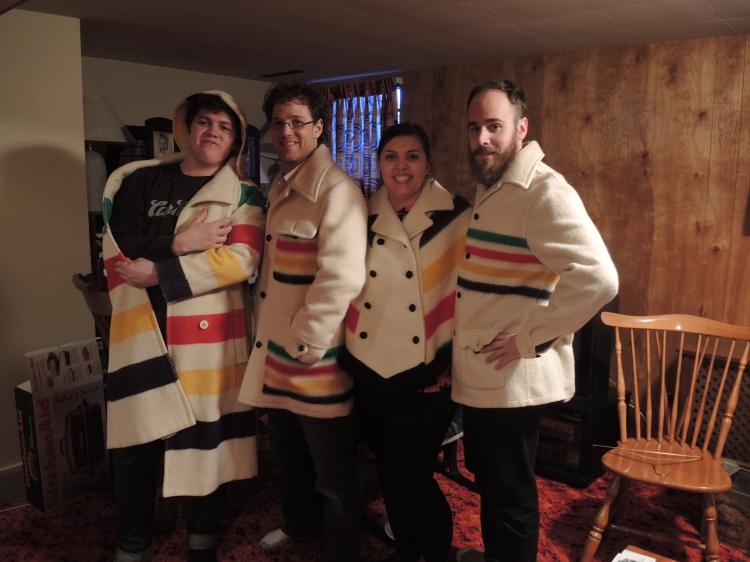 Our youngest daughter, Christine, was not able to make it home from Italy for the party. We missed seeing her. Three of my brother’s kids weren’t able to make it either. The party day was decent weather-wise, but that night it started to snow, dumping more snow than Lethbridge had seen in 2 years. The last photo shows the weather we woke up to. Typical southern Alberta weather. Sunday morning we headed back to Calgary. Devon, Andrew, Brad and Kim had flights to catch on Monday, and we weren’t taking any chances with the roads. Marc was keen to get home too. I don’t think any of us wanted to spend another night at A Coulee View Getaway Inn. That was the name of the house we rented for the week-end, but it did not exactly match the description on the website. 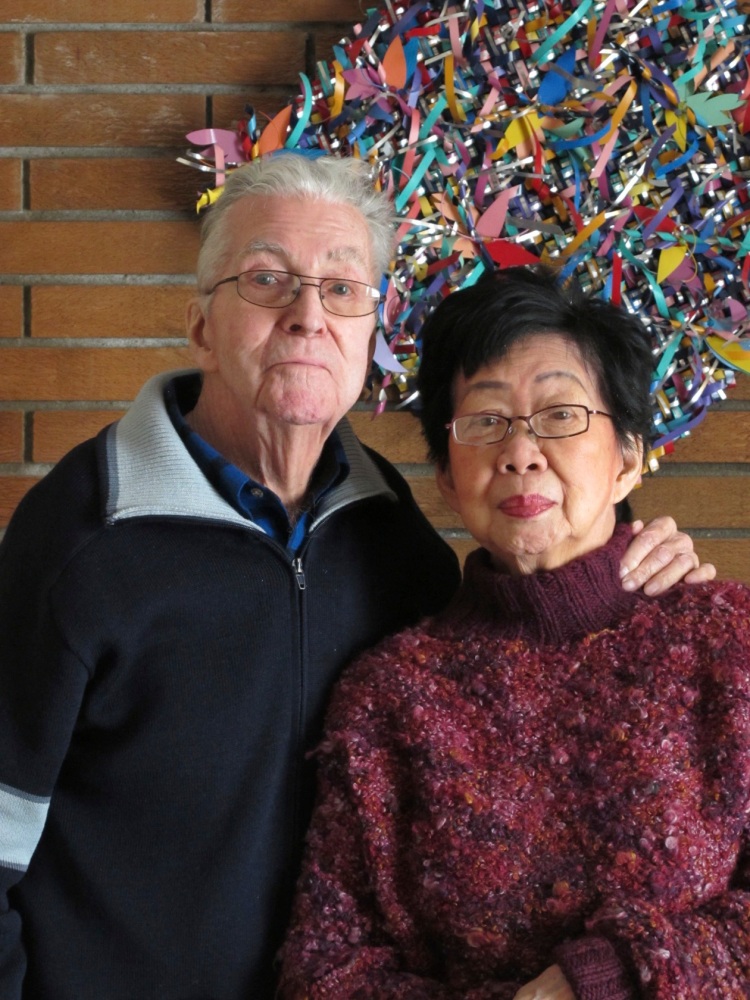 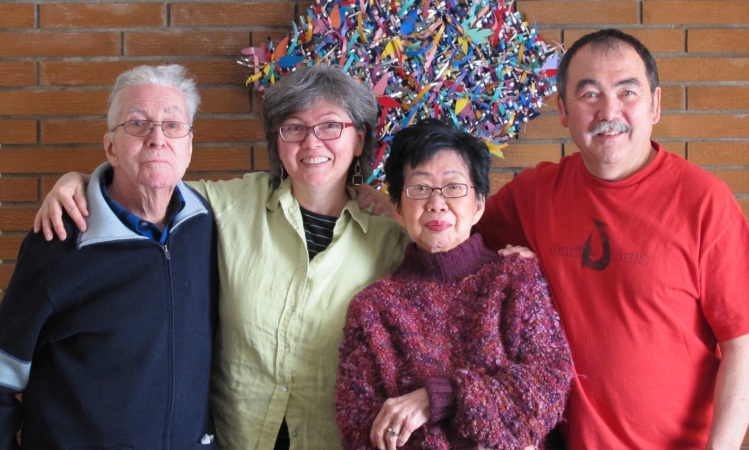 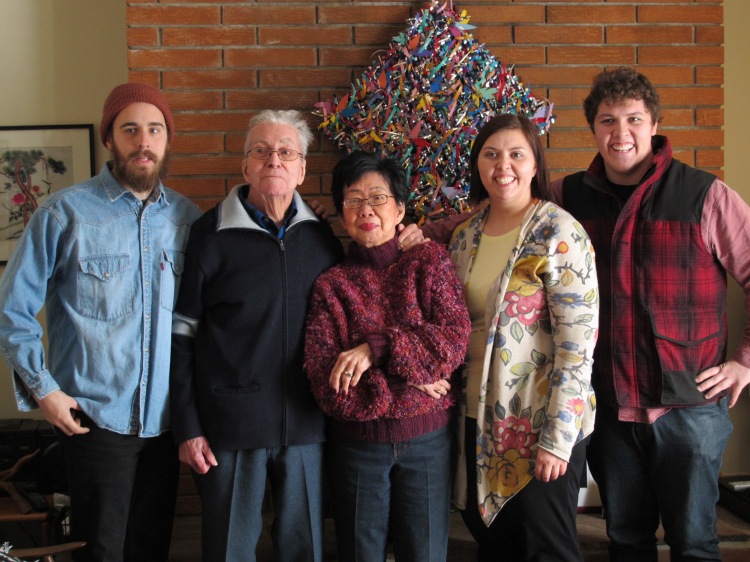 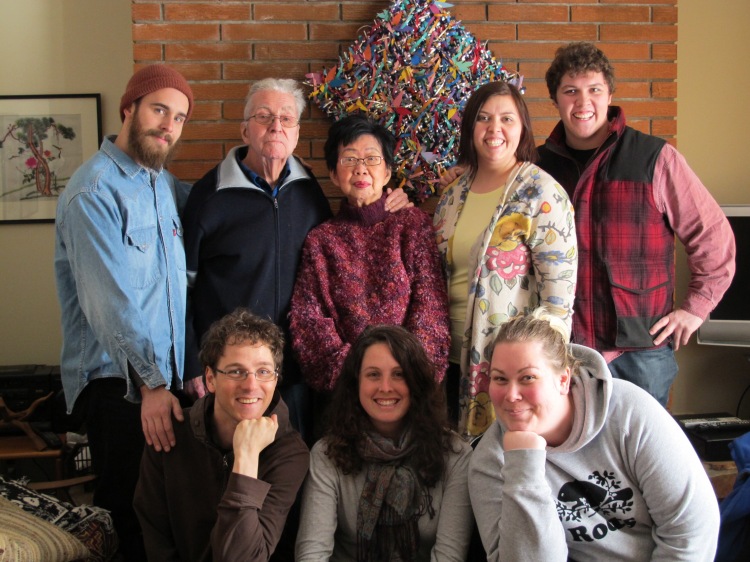 Here’s Felix trying to get comfortable as we were getting ready to leave. We were all a little anxious to get going, since this was the “view” in the morning. (winter trees shielding our view of the neighboring cemetery) 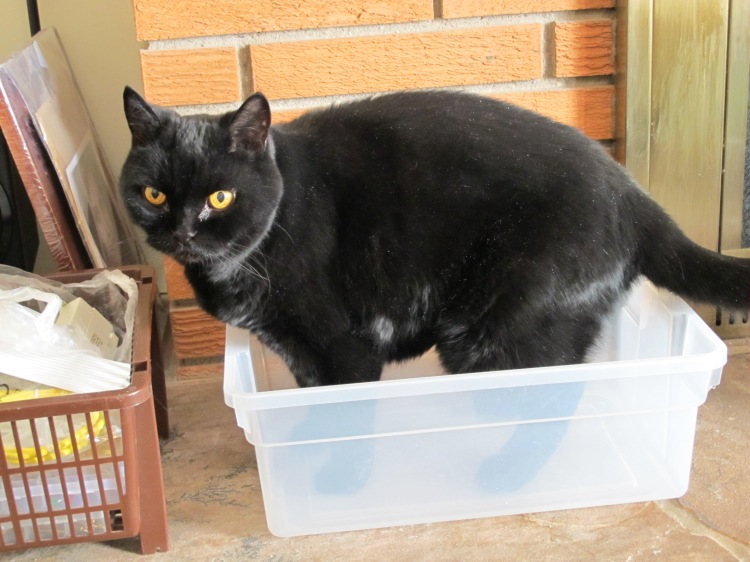 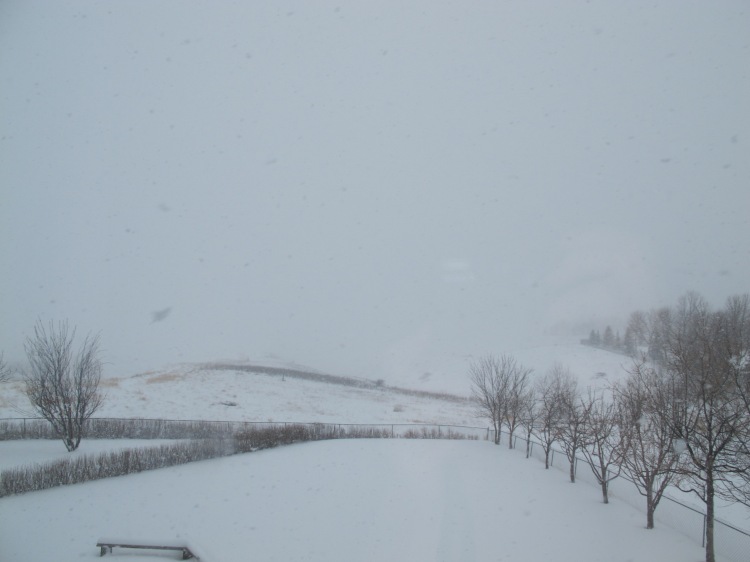 All in all it was a great week-end. I think everyone enjoyed themselves – even my mom and dad.