Let me begin by saying that I have incredible daughters. Really. No other way to say it. (I also have incredible sons, but they aren’t part of this story.) So when I had an issue with my kitchen soap dispenser, it makes sense that my girls would come to the rescue. But let me take you to the beginning of this enticing little drama.

Last year I found an OXO soap dispenser that I thought was brilliant. The beautiful design in brushed chrome and black plastic has a clear plastic portion on the bottom inch of the dispenser. As my dish detergent is orange-colored, it gave a nice hit of color by the sink, and it was easy to see when the detergent level was getting low. 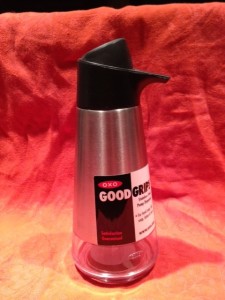 After only a couple of months, the dispenser was accidentally knocked into the sink and the lid broke. I was distraught. Then I went out and bought an identical replacement. Problem solved. Early in December, my replacement dispenser met with a tragic end. I’m not sure how, but I went to pump soap into the sink and discovered the lid was broken. I was so annoyed. OXO makes some fabulously designed items, but no matter how great it looks, it has to function without breaking so easily. This was not acceptable and it left me with a dilemma. I needed a replacement, but only a fool would buy another one of the same obviously faulty dispenser, right? While I debated what to do, I patiently set the broken lid back in place – several times a day. What an idiot I can be!

Then – wonder of wonders – Christmas arrived, and with it an incredible gift from my girls. I now own what I assume is the only Absolut vodka bottle soap dispenser in the world. I think this was Christine’s idea, but sometimes it takes a family to build a soap dispenser (at least I think that’s how the saying goes). Devon contributed the bottle from Montreal and Christine went on a search for an appropriate pump. Her search started in Toronto and ended in Calgary – she was up to the challenge. She even enlisted the help of her good friend, Nicole, to eventually find the right pump. Here’s the outstanding result of their joint efforts: 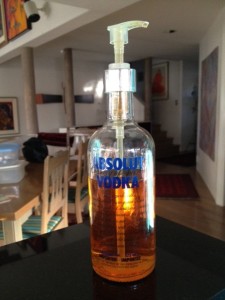 Perhaps I should mention why this is so amazingly special to me. I have collected Absolut Vodka ads for many years, and for the past few years I’ve augmented the collection with special Absolut bottles. I don’t drink the vodka, but I love the clever advertisements, and the shape of the bottle is such a classic. What’s not to love? This is the 375 ml. size bottle, if anyone thought I had a gigantic soap dispenser. Not so – this one is just right.