I just returned home from a trip to visit my parents. I took them a surprise. I took them a cat. It seems that while I was lamenting the fact that I would have to give up my cat-sitting job (looking after my son’s cat while he is away), a friend took pity on me and offered me a cat. All well and good, except that I really can’t have a cat here forever, since my daughters are both allergic to them. Then someone suggested that I keep my son’s cat, Kush, until he returns home. Then I could take the other cat who needed a new home to stay with my parents. I was reluctant to mention this plan to my folks. They have had cats in the past, but the passing of their last kitty, Jasper, had quite an impact. I was certain they would decline the opportunity to become pet owners once more. I also know that cats are fantastic companions, and that they bring joy to your life every day. I decided I would make the choice for them.

Felix spent his formative years with a lovely girl, Laura, who loves him very much. As her schedule got busier and busier, she felt Felix was spending too much time alone. So putting Felix’s needs ahead of her own, she made the tough decision to find him another home. That’s where I thought my parents could help out. They are at home all day, every day, and they love having an animal to take care of. A match made in heaven!

I made arrangements with Laura to pick up Felix at lunch time on Wednesday. Since I hadn’t finished packing the car, I had to stop back at home for a few minutes. Felix was in his carrier in the back of the car. I went into the house to grab my things. I came back to the car, opened the back door to toss them in and was shocked to see Houdini, I mean Felix, in the front seat! Apparently the zipper at the back of his carrier was open on one side. Imagine my surprise! I quickly closed the door and thought about how I would convince a cat to get back into his carrier… Seems the direct approach worked. I moved the carrier into the front seat, called Felix, picked him up and popped him into the carrier. He was no trouble at all. After that we had an uneventful (although not quiet) drive for a couple of hours. I’m still not sure whether Felix liked it better when I talked to him or ignored him. He seemed to complain either way, but he managed to relax for a few minutes. I was glad to reach Lethbridge. 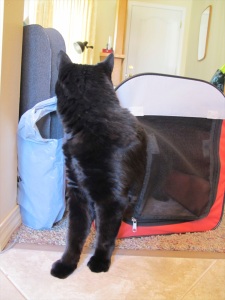 I carried Felix in his carrier into my parents’ house. I opened the door part way so he could display his escape techniques. He immediately set about exploring the house.

My parents seemed a bit confused by Felix’s arrival so I just kept telling them how great it would be to have a cat again. I think it took about 15 minutes for them to agree. Felix moved in and captured their hearts. My uncle Henry came to dinner and this self-professed dog person was also quite smitten. This cat has it made!

Felix is easy-going and affectionate. He likes grooming, catnip toys and long walks on the beach. Not really – the beach part isn’t true for this indoor cat. But he does like looking out windows. I left Lethbridge after two days, confident that Felix will be very happy in his new home. Very happy.

I think having a black cat to photograph will be a challenge. Do you have any idea how difficult it is to even find a black cat when he isn’t moving and he keeps his eyes closed? I didn’t have enough time to capture great photos on this trip, but give me some time and I’ll try!