Over the week-end I had an opportunity to try another sous vide recipe. I was invited out for dinner and offered to bring my sous vide equipment over to do an experimental main course. Nothing like trying out a recipe (and new technique) on a dinner party group, right? My friend bought all the ingredients from a recipe that I supplied. I went over early in the afternoon to help prep the lamb chops. Our first challenge was figuring out the new vacuum seal bag maker, but once we did that there wasn’t much to learn. The lamb chops were seasoned with salt and pepper, rubbed with a little olive oil and placed by twos in bags, hopefully with a sprig of rosemary. I fell off the job a bit and some of the lamb was done sans rosemary. I was also too focused on bagging the lamb to remember to take any photos! 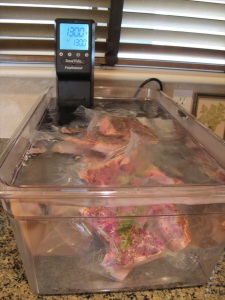 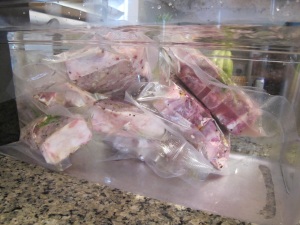 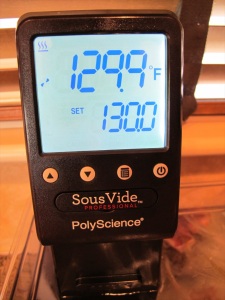 After all the meat was seasoned and sealed in bags, it was dropped into a large tank of 130 degree water. The water circulated and the temperature was held for about 2 and 1/2 hours. I had gone home to clean up for dinner, so when the time was up the chops were quickly chilled and refrigerated. They looked pretty sad at that point. 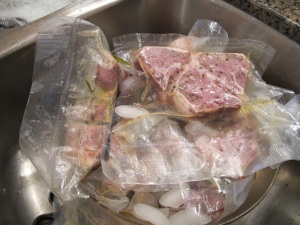 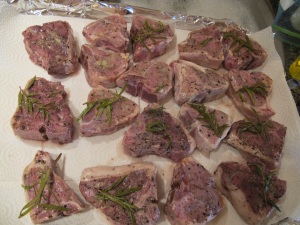 At dinner time the chops were released from their packages, spread out on paper towels to dry and then seared on a hot grill for about 2 minutes per side – just long enough to give some nice color. At this stage they were looking good. The lamb was perfectly cooked. It seemed a bit tough to cut, but it was tender to eat. I think the bones of the loin chops made access difficult because of the thickness of the bones, but it was a minor issue we were able to overcome. 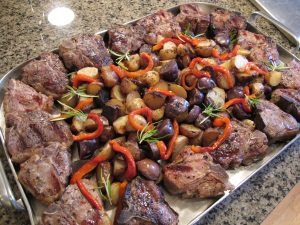 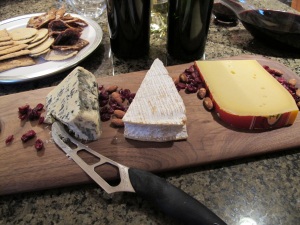 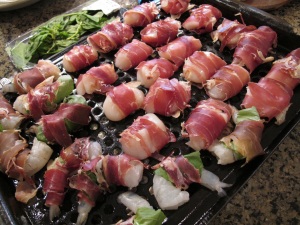 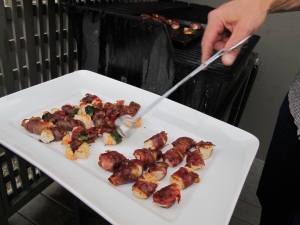 We enjoyed a fabulous meal which included prosciutto wrapped shrimp and scallops, a beautiful selection of cheeses with gourmet crackers, an outstanding salad, lamb loin chops, grilled baby potatoes, steamed broccolini with lemon, a delicious carrot cake and alfajor cookies. I was unable to photograph most of the meal properly, as the low battery light started flashing just as the lamb came off the grill. I didn’t want to risk not catching it in presentation form. I won’t go to dinner without my extra battery again! 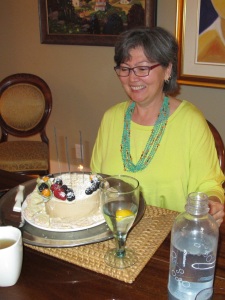 As you can see, this cake and cookie photo was not “set up” for the blog, but forgive me. I was having too much fun!